I finally broke down and subscribed to Portal via Valve's online distribution system, Steam. Overall, it's a pretty fun game but what really makes it is the writing. Highly recommended if you got either a PC or XBox 360.

So apparently, there's this really cool mod for Cave Story (wikipedia article) called Jenka's Nightmare. However, to really enjoy it, you had to have finished Cave Story with the alternate ending or something. So now I've gone and started playing Cave Story again to try and get this ending.

So why am I talking about this? Because if you've never played it and you enjoy side-scrolling action games like Metroid and Castlevania, then you really, really, really need to play this game.

Well, now with that out of the way, I'm going to talk about what I've been doing recently with all of my projects:

dead.licious finally got some lovin' due to several e-mails from users needing a bit more functionality. Hopefully that works out for them.

I've also been getting a fair number of e-mails regarding Neko Type-R. I think people are actually using it to teach their kids typing since it ended up in the Education downloads section of Apple's website. I find this amusing because, really, I wrote Neko Type-R because I had this burning idea for a racing game contest going on at the time that I had to just get out of my head.

Anyway, in it effort to get things of my to-do list, I've been revisiting this project and adding features that people have suggested such as allowing the user to specify a word list, making the game easier for little kids (or in general -- I guess 30 words per minute is pretty fast for most people), making the text easier to see, and enlarging the graphics (possibly even provide a full-screen mode). I think there's some other things on the Neko Type-R to-do list as well but those are the ones that come to mind.

Lastly, Chemical Bonds is getting a remake. Or rather, it did, I'm just still working on it. As an experiment in trying out Python, I've decided to remake Chemical Bonds using Pygame. So far, the core gameplay is finished. I want to add a couple more elements before I consider it done for an initial release. But what's really delaying it (other than working on other stuff), is putting together a title screen with a menu, an options screen, help screen, etc. Also, the initial release will only have the survival mode where you try to last as long as possible. Actually recreating the gameplay from Chiral will come later on.

Meanwhile, work on my personal projects has stalled while I fix more bugs that I really ever want to fix again as I finish up my current project at the day job. So if you're one my users waiting for bug fixes or features to be added, there will be a slight delay as I try and finish things up at work.

Karen got me Guitar Hero 2 for my birthday. NO GUITAR MERCY!!!

Or at least I would be if we all had three extra fingers on both hands.

Because then we'd be counting in base 16 instead of base 10.

Unfortunately, I can't credit this properly so if someone happens to know who did this originally, please let me know. 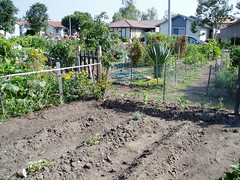 So here's the story:
Karen and I go out to Home Depot to buy some seeds but all they have are wild flowers (no vegetables or herbs). Next stop was Lowe's where they didn't have any seeds at all. They did, however, have a small collection of plants already started that we could move into our garden so we bought some of those (bell peppers, basil, eggplant, and curry herb which isn't as useful as it sounds - rosemary, thyme, and mint were purchased as well but they stayed on the balcony). Finally, we went over to Target and guess what: no seeds their either. Karen did find a couple more plants, though (honeydew, watermelon, and cherry tomato). At this point, I wandered off to let Karen look around the garden section some more. When I came back, Karen had managed to sweet talk one of the employees into selling her several seed packets. Apparently, what had happened was that she asked an employee about seeds, he had found some in the back and was going to hand them over to her but then a manager told him to throw them away since no one was buying them (except for, you know, Karen and I). So the employee tells Karen to just meet him in the back and he'll give her the seeds instead of throwing them away. Karen agrees and ends up with a shopping basket full of seed packets. We head over to the register and instead of ringing up the seed packets, the employee discreetly puts them in a shopping bag and hands it over to us. Score! Karen was a bit sad, though. If she had known that the guy would be giving away the seeds for free, she would've asked for more. Anyway, I think our total haul from that adventure was:
broccoli
sunflowers
corn
garden beans
squash
zucchini
and a couple other things I can't remember at the moment

While Karen and company were on their adventure race, I was able to make my programmer art for Symbolical less of an affront[1] to one's eyes.

Not much more left to do. I'll probably work on the icons a little more and I still have to write some text to accompany the game (such as expanding "Game over." to something less prosaic[2]).

[1] You better remember that one, Karen. You might see it on the GRE :)

[2] Yeah, you should probably remember this one too... 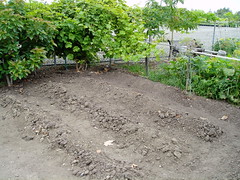 And so begins the garden project. Here, a lot of the weeds have been ripped out, the ground tilled, rows formed, and seeds planted. Whew! That was a lot of work.