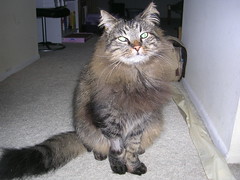 Poor Darwin. He's been having a bad week. First, he got a urinary tract infection and was peeing blood everywhere so we took him to the vet. The vet discovered that he had crystals in his urine so she prescribed some special dietary food for him in addition to antibiotics. Then his urinary tract swelled up, preventing him from peeing so we had to take him to the after-hours vet where they put in a catheter and IV. Well, apparently, to put in the IV they had to shave his leg making him look like he has, well, a peg leg. He's still having some urination problems so he's been living in our bathroom so he does't pee on everything.

On a related note, overnight stays at the vet (especially the after-hours one) is expensive; I've spent almost $1000. Unfortunately, after doing a little bit of research into pet health insurance, it doesn't seem worth the cost.
Collapse